Surround yourself with thousands of jellyfish – Truely a once in a lifetime bucketlist worthy experience. An rare opportunity to interact with an animal that you should avoid. These jellyfish a harmless to humans. 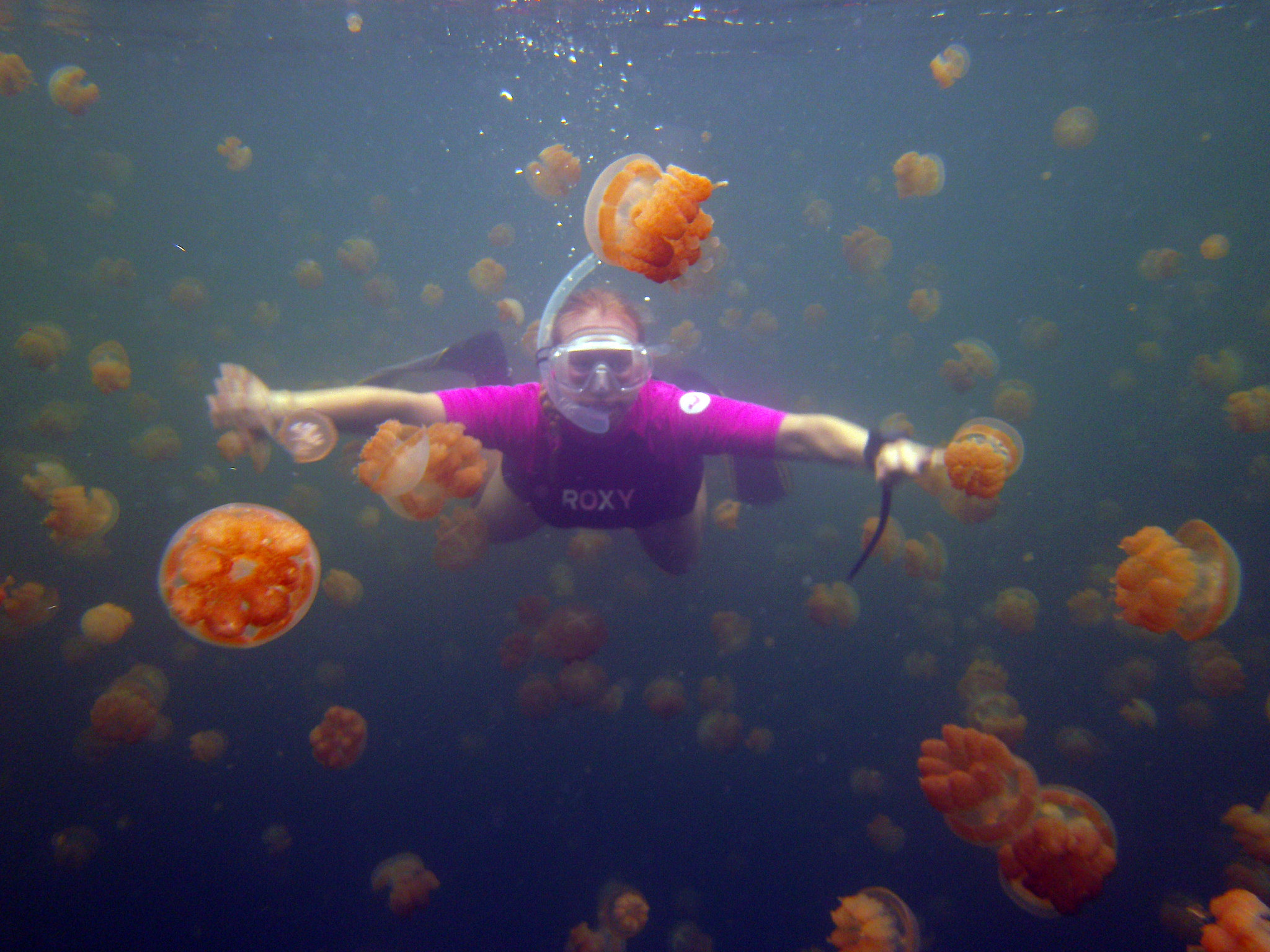 Jellies from above Palau

Jellyfish Lake is connected to the ocean through fissures and tunnels in the limestone of an ancient Miocene reef. However the lake is sufficiently isolated and the conditions are different enough that the diversity of species in the lake is greatly reduced from the nearby lagoon. The golden jellyfish, Mastigias cf. papua etpisoni, and possibly other species in the lake have evolved to be substantially different from their close relatives living in the nearby lagoons.

Jellyfish Lake is around 12,000 years old. This age estimate is based on the depth of the lake (about 30 meters), an estimate of the thickness of the sediment (at least 20 meters) and the rising sea level since the end of the last ice age. About 12,000 years ago, the sea level had risen to the point that sea water began to fill the Jellyfish Lake basin.

Tourists are required to obtain a pass to access Jellyfish Lake. The Rock Islands/Jellyfish Lake pass is $100 and is good for 10 days.
Snorkeling in Jellyfish Lake is a popular activity for tourists to Palau. Several tour operators in Koror offer trips to the lake. Eil Malk island is approximately a 45-minute boat ride from Koror. The lake is accessed by a short trail from the beach on Eil Malk to the lake.
Scuba diving by tourists in the lake is not allowed. Two reasons are put forward for this:
The bubbles from scuba tanks can harm the jellyfish if they collect beneath their bell.
The anoxic layer that begins at about 15 meters contains high concentrations of hydrogen sulfide which can be absorbed through the skin of a diver which can lead to death.
Jellyfish Lake is currently the only one of Palau’s marine lakes open to tourists.

Although both species of jellyfish living in the lake have stinging cells (nematocytes), they are not in general powerful enough to cause harm to humans. It has been reported that it is possible to notice the stings on sensitive areas like the area around the mouth. The Fish ‘n Fins tour guide recommended that people with allergies to jellyfish consider wearing protective clothing.
Saltwater crocodiles are native to Palau but there has only been one death attributed to them in recent times and they are generally not considered a threat to divers.
The hydrogen sulfide in the anoxic layer is a serious risk to scuba divers entering this layer. The gas can be absorbed through the skin. In 1977, the maximum safe threshold level for hydrogen sulfide was set at 10 ppm. The concentrations exceed that by eightfold at the bottom of the anoxic layer. However, the hydrogen sulfide concentration down to the chemocline at about 15 metres (49 ft) is reported to be zero, and if the anoxic layer is avoided, the hydrogen sulfide in the lake does not pose a risk for snorkelers. 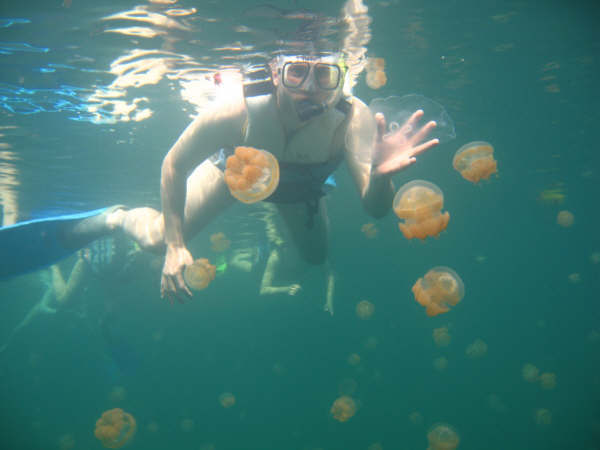 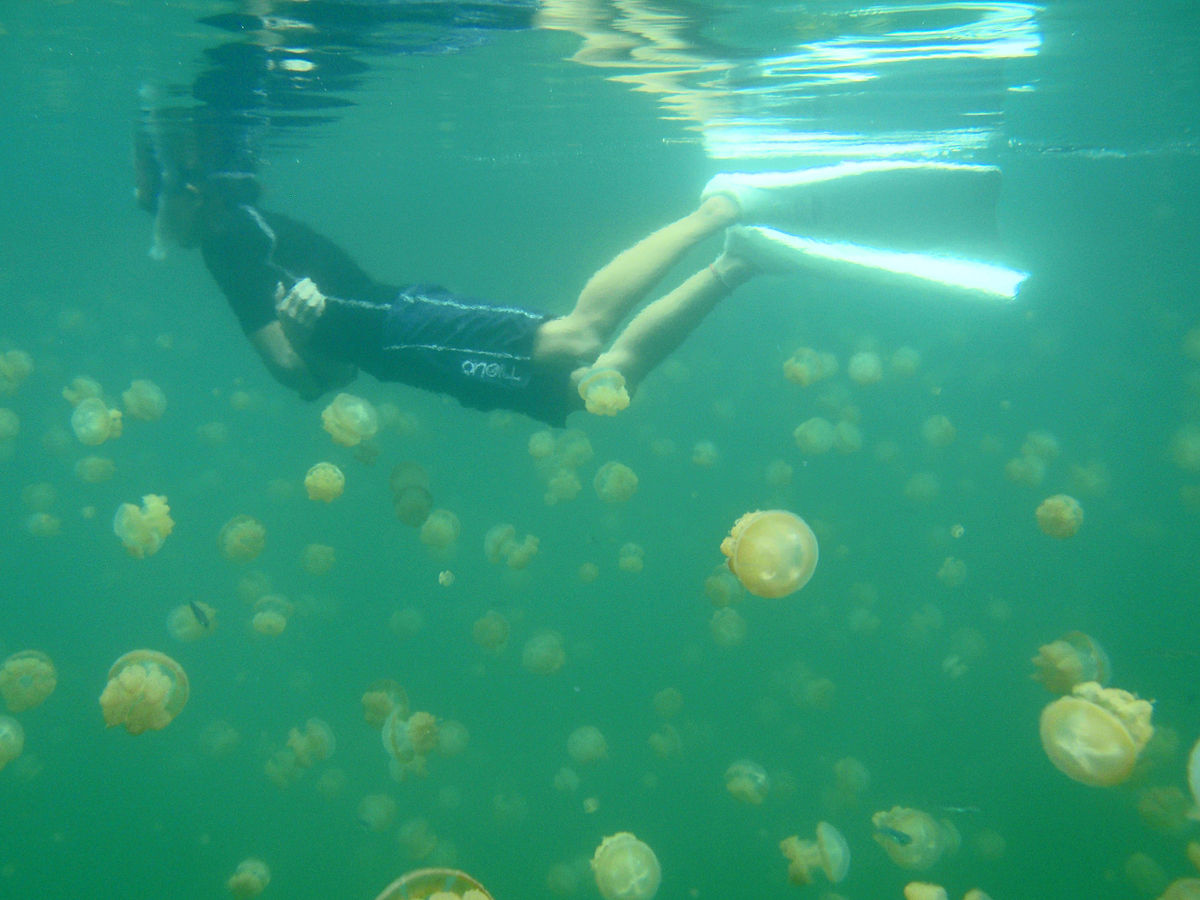 A swimmer snorkeling in Jellyfish Lake. 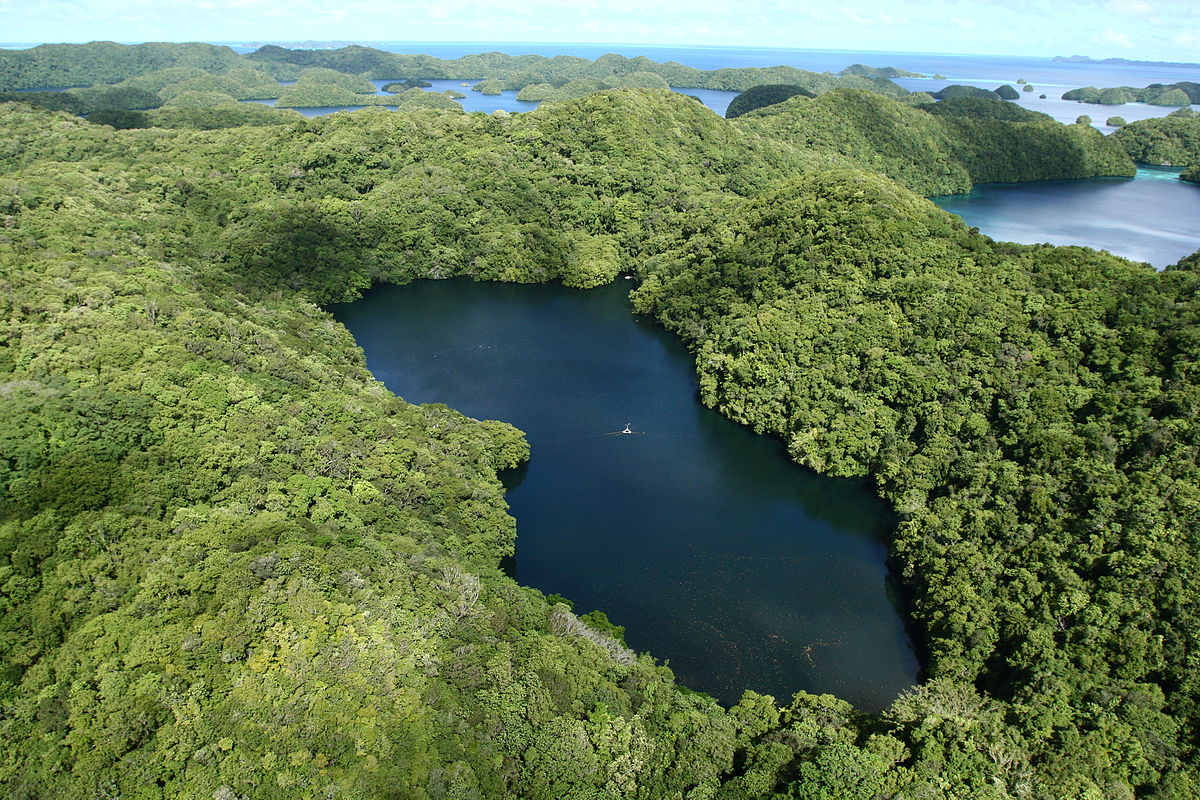 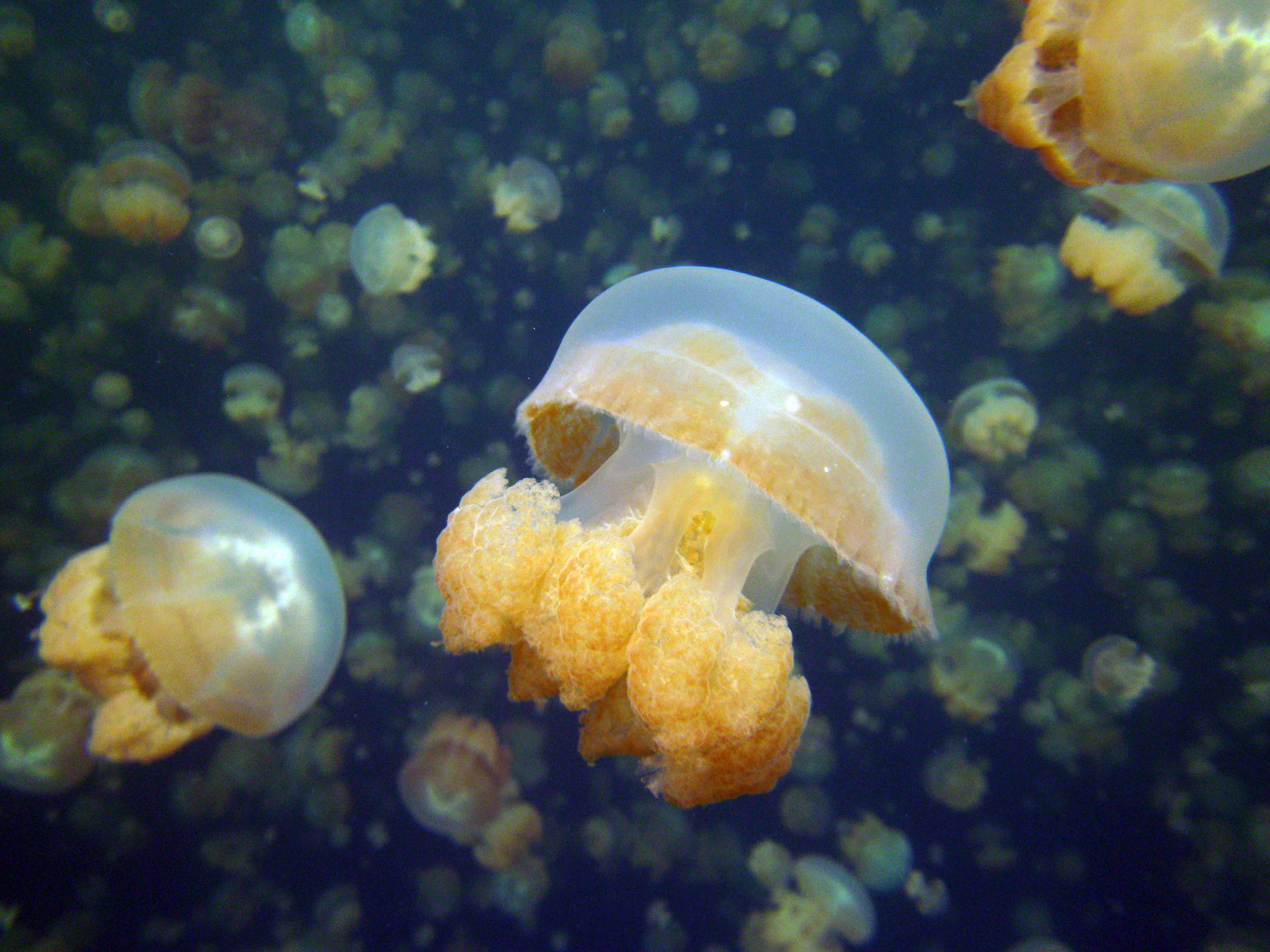 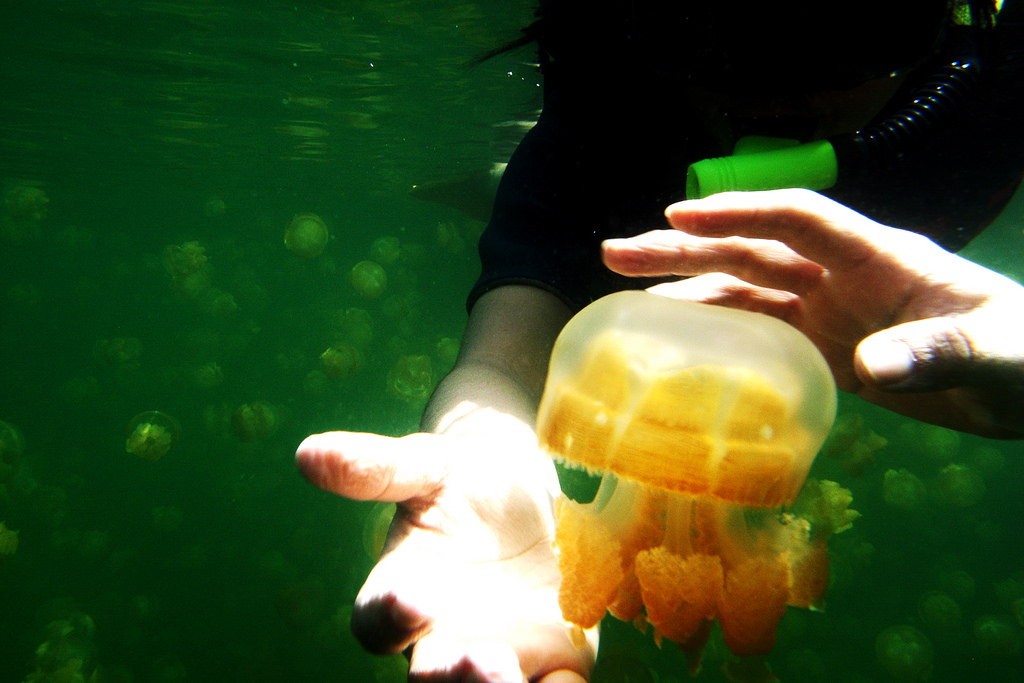 Up close with Jellyfish 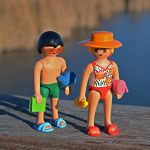 Put on your favorite bathing suit for enjoying the sun and water. 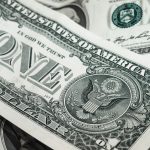 You will need some money for this activity 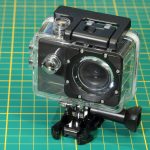 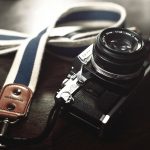 Any activity is complimented by bringing your camera along. 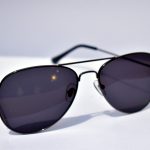 Protect your eyes form the sun.

Bring a camera that works under water

An underwater camera will allow you to capture the essence of what swimming in a lake filled with thousands of jellyfish is like.

The island is isolated and will not have most amenities if you forget something. Go over a list of everything you need for your encounter with the jellyfish and make sure you have everything.

Upload your photos for all of your friends to enjoy.